Yehaa Bob – Say his name in some circles, and you get whispered reverence, while everyone else says huh? Until my last Disney trip my life was infinitely worse because I didn’t know about possibly the best kept secrets at Disney World. And it’s free. Not included in park admission free. Completely free.

Disney Nerd Tip (DNT): Yehaa Bob is one of the best nighttime entertainment options at Disney World, and it is free even without a park ticket 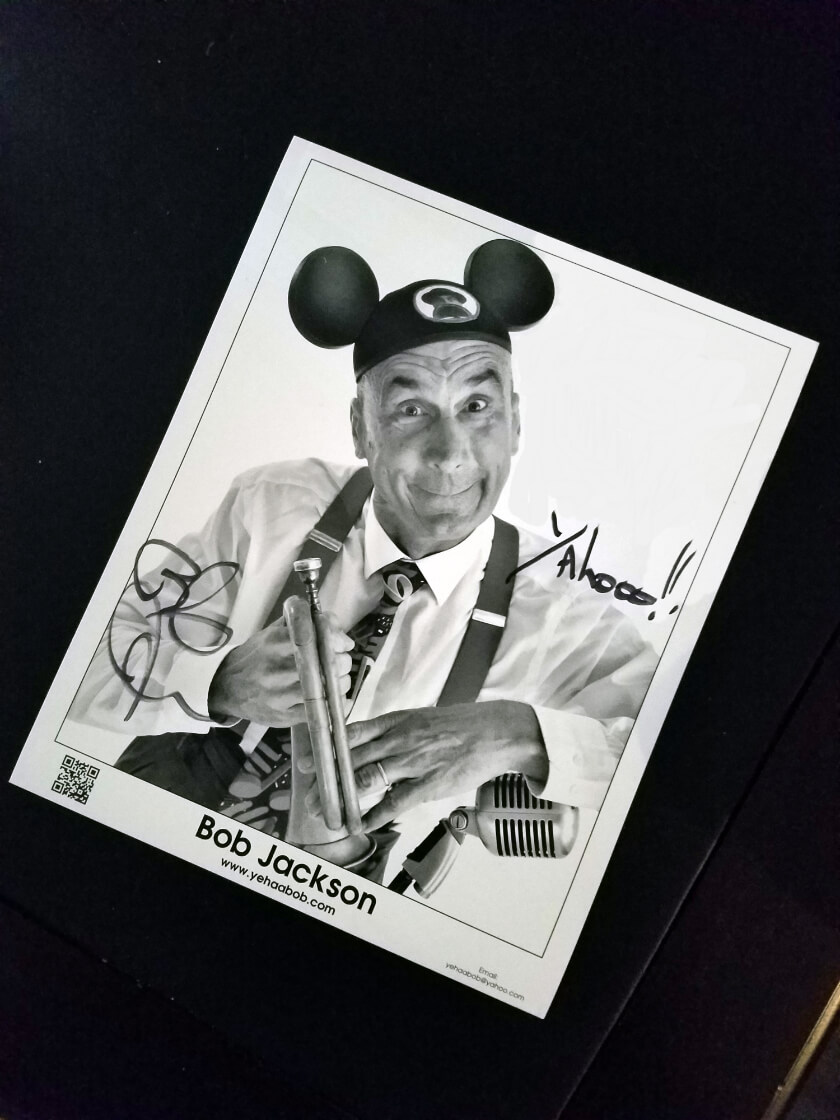 Yehaa Bob, also known as Bob Jackson, is a piano player who has been at Disney World for over 20 years. He is currently playing Thursday through Saturday nights at River Roost at Port Orleans – Riverside Resort. But calling him just a piano player is a grave injustice. It would be like calling Babe Ruth just a baseball player. Yehaa Bob is a true entertainer. A dueling piano player with perfect comedic timing. A showman through and through. On Broadway, he’d have a full house and give Hamilton a run for it’s money.

Luckily for us Disney nerds, Yehaa Bob isn’t on Broadway. And he’s not behind a cover charge or at an impossible to get Advanced Dining Reservation. You don’t even need a park ticket to see him. He’s all ours at River Roost Bar in Riverside.

River Roost is a lounge/bar located off the lobby of Riverside next to Boatright’s Dining Hall. Port Orleans – Riverside Resort is a moderate resort in the Disney Springs area. Port Orleans – French Quarter is its sister resort, meaning they share some amenities and are within easy walking distance of each other. Riverside’s location is a boon for Yehaa Bob lovers because it is an easy boat ride (read: free) from Disney Springs.

DNT: There is free boat transportation from Disney Springs to Riverside to see Yehaa Bob (and the rest of the resort)

If you are thinking, Minnie, he’s a Disney Institution, your love is a given. Well yes, I wouldn’t be a true Disney nerd if I didn’t have a fondness for Disney institutions, but that’s not it.

Prior to our stay at Riverside, I did my research and came across talk in hushed tones (or as hushed as Disney blogs can be) about a performer named Yehaa Bob who plays at the bar there. Every review was glowing (not an easy feat for anything Disney these days). So, I knew I had to see him.

I told Mickey, my resident curmudgeon for all things Disney, that the plan for Saturday night was to go back to the hotel after dinner and see Yehaa Bob. We tend to be night owls, so I wasn’t worried. When we get back to the room, however, Mickey was tired and provided a lot of resistance to even going to the bar at all. But through my powers of persuasion I convinced him to join me for one drink.

When we arrived to the main building (at Riverside the rooms are spread out along the property, with the amenities being centrally located), River Roost was packed. We came in through the Boatright’s Dinning Hall entrance which is closest to the stage; a back entrance of sorts. And Yehaa Bob saw us right away. He called out to us and asked us where we are from. I’m not usually one for audience participation (especially before several cocktails), but something about him drew us in. One look at Mickey and I could tell we’d be there for more than one drink. All of the seats were taken initially, but after a few minutes one cleared and we snatched it up.

DNT: Don’t be discouraged by standing room only, not only is it worth it, but tables seem to open up as families head in for the night

This whole time Yehaa Bob was pounding away at the piano with songs we knew or wanted to know. Sarah is now a personal favorite, if he doesn’t play it by the end of the night be sure to request it. Yehaa Bob’s energy is infectious. His bits repeated throughout the night never seemed to be tired. Audience participation, even as people were heading back from a long day, was almost deafening.

The service at River Roost was the only cloud of the night. After our initial drinks, Mickey, with his standard sangria and me with the Southern Hurricane (delicious and highly recommended), Mickey’s second round was ordered, but never delivered. I was able to get the attention of another server who was very sweet. She corrected the problem immediately, bringing Mickey his drink and even asking if we wanted to speak to a manager. We declined, and from then on the service was spot on. Sometimes it just takes a little squeaking to get oiled.

DNT: The Southern Hurricanes at Riverside (served at the bars and restaurant) are delicious; sweet, but not sickingly so.

DNT: Disney prides itself on great customer service, if there is an issue say something (nicely), and they’ll make an effort to fix it. Even if you don’t normally say anything when there are issues, Disney World is the place to speak up.

Yehaa Bob played 3 sets while we were there. The man has more energy in his 60s than I do in my 30s. He just kept going and the energy never faded. The audience thinned out as the night went out, with the last set wrapping up around 11:30pm. As the families left after the early sets, there were plenty of seats for newcomers and the show got slightly more PG-13 (this was the most risqué it got, but still more than I expected for Disney). Even the last set was completely family friendly (unless you count audience slip ups during Sarah), but still pure entertainment even for two tipsy 30-somethings.

DNT: As with most nighttime entertainment at Disney, the later it gets, the easier it is to find a seat for Yehaa Bob

DNT: Yehaa Bob’s sets have more innuendoes as the night goes on. I wouldn’t call it risqué, but if you are concerned go earlier in the night.

Between each set, Yehaa Bob takes pictures with his fans and signs autographs. It didn’t feel like he was doing it out of obligation, but he honestly enjoyed it. And so did the audience. There was always a line, but Yehaa Bob made sure to take time with everyone, asking people where they are from and being genuinely interested in the answers. He even designated various audience members as his official photographer and took a picture with every group to post on his own website. This was one of those experiences that just oozes with Disney magic and makes it unsurprising that Yehaa Bob is the recipient of a Legacy award.

DNT: Don’t miss getting a photo and autograph with Yehaa Bob in between his sets

Yehaa Bob is a hidden gem at Disney World. He could charge a cover and it would still be worth it, but the fact that he is playing away at a moderate resort make it that much more special. I generally tell people that if you are at Disney to see the parks stay at the parks for as long as you can. I love the nighttime entertainment throughout the parks and highly recommend it, especially for first timers and those who don’t go very often. But, and this is a big but, I absolutely recommend making an effort to see Yehaa Bob. He plays late enough that you can catch his last set after a park closes, but I would even recommend leaving before close to make sure you don’t miss his last set. It is well worth it. I’d go so far as to recommend it if you are in Orlando and not even going to Disney World. My Mickey is still telling people about Yehaa Bob with glowing reviews, even acknowledging that he didn’t want to go and I had to basically drag him there. Yeeha Bob is one of those people that makes Disney so special. I can’t believe it has taken more than 20 trips in nearly 30 years to discover him. Don’t wait as long as I did. There is no reason, after all it’s free.